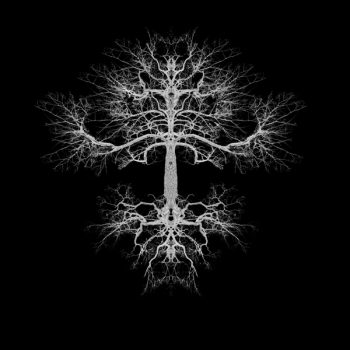 Art Lab Gnesta invites you to the last show in the context of Green Year 2012. During the past year we have produced projects and exhibitions related to the relationship between man and nature, including the aspects of the housing question, food production and the eutrophication of the nearby Frösjön.

In the last show, we show two works that concern the ambivalence in humans’ encounters with nature – we are part of it but also alien to it.

The Tree – Gustaf Broms
(2009-2012) Three-channel video installation, about 56 minutes
By filming a tree for a year, from winter to winter, Broms examines the rhythms of nature. The Tree is presented in a darkened room, using only actual audio from the tree’s habitat. The black figures moving around the tree tokenise an anthropocentric perspective – such as language, religion and property. In this way, the work throws light on man’s relationship to nature. But at a time when the whole globe is mapped and large parts of the available land are cultivated, when we are also challenged by global climate threats and the consequences of human action: is the difference between nature and culture as palpable as we claim? The Tree is an attempt at reconciliation, interweaving between the two sides of human life: as a biological process and as an intellectual being.
www.orgchaosmik.org

Limitations – Nanna Hellberg
(2010) video, 1:13 min
In a slow, dreamlike sequence, a man and a wolf meet. All the tension a predator carries, historically and culturally, weaves an underlying threat of violence. “Limitations” presents a choreography of language and the difficulty of communicating with the other. The relationship teeters on a knifedge, ready to fall over, in quiet border country and a study in power.
www.nannahellberg.com