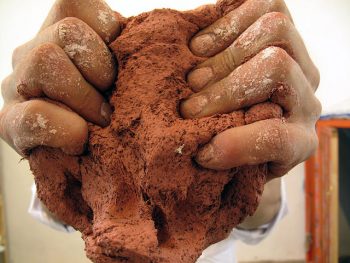 On Saturday, February 4, Art Lab Gnesta opens its doors for the year’s first exhibition. 2012 will be a year of exhibitions, projects and discussions on environmental and sustainability issues. For the exhibition Building Grounds, we have invited Logiiraz Ganbat to work on location in the exhibition hall, Mikael Lindahl to show a video work in the project room, and in an interview, Gnesta Municipality talk about working towards a sustainable future.

The artist Logiiraz Ganbat has moved in with Art Lab Gnesta. With him he has a Mongolian yurt, a heavy tent that Art Lab has bought, and this will also serve as accommodation for many future visiting artists. During his period in Gnesta he will work with sculpture, and especially with the special material that has been part of his work since the early 1990s.

Starting with traditional papier mâché techniques and adapting the ingredients in various ways, Logiiraz Ganbat has developed new materials. Sand, grass and soil in his hands become the basis for new sculptures. At Art Lab Gnesta the artist uses cow manure from nearby farms. In the large exhibition hall, visitors are invited to follow the process of preparing the material, and eventually his work with sculpture and relief.

The yurt becomes the basis for Art Lab Gnesta’s studio programme for invited artists. In this traditional Mongolian dwelling, ideas and perspectives on living, art and sustainability issues will be explored for a long time to come.

In the project room is Mikael Lindahl’s video work Foundation of a Building. After having cycled between Stockholm and Skåne as part of a project at the Royal Art Academy, where Mikael Lindahl has just begun his final period of study, he dug out the foundations of a country cottage near Wanås sculpture park. By first taking away bushes and other greenery, which had long grown over the spot where the cottage once stood, he exposed and painted white the foundations. It becomes an alternative historical memory, but also suggests an ambiguous image of the nature of work.

Inside the biological toilet, opened with the exhibition of Kultivator last autumn, an interview with Gnesta Municipality’s Planning and Construction Manager Christer Andén on the plans and visions concerning Gnesta’s intended population growth, and how the expansion of the town will work in relation to sustainability issues.