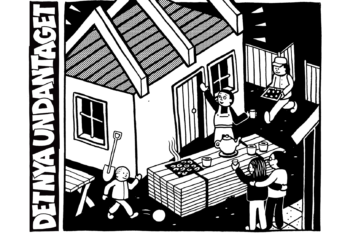 Join us to celebrate when we put the roof in place on the newly built house!

During the last year Art Lab Gnesta has been working with the project Det nya undantaget (The new exception), a proposed solution to some of the challenges currently permeating the swedish labour- and housing market; a specially designed “attefallshus” that can be erected in private gardens to give work and housing to a person who has recently come to sweden.

During the summer of 2017 the first house was started being built. We now want to invite you all to join us to celebrate this by sharing a syrian/swedish fika!

In Sweden during older times it was common to change the legacy on the farm to let the younger generation take over the family farm. A smaller house was then often built on the land, refered to as undantaget (exception).

A contract was then written between the generations, giving the older generation the right to live in the house during the rest of their lives. This was an arrangement made to unlock the potential of the land and at the same time take care of the older generation. Looking back it can be perceived as a kind of pension before such a thing existed.

In the project Det nya undantaget (The new exception) Art Lab Gnesta is revitalising this swedish tradition of social solutions to complex societal challenges. By unlocking the unused potential in private gardens and combining it with the current situation for a lot of people who has recently come to sweden; Art Lab Gnesta want’s to face contemporary challenges within the field of labour and housing. Together with Gnesta kommun we are therefore producing a report about the project, to spread the knowledge, experience and methods being generated through the process of building the first house. With the report we hope to spread the exceptions (Undantag) in the region and the rest of Sweden.