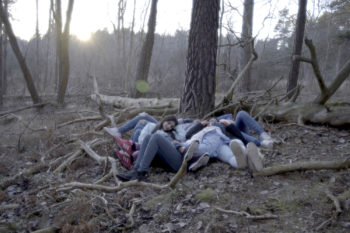 In the exhibition the artists Meira Ahmemulic and Sophie Vuković twist and turn concepts and notions of identity, home and language. In the dissertationNär Andra skriver: Skrivande som motstånd, ansvar och tid the author and translator Mara Lee writes the following about movement in language “[…] But words move. Movement itself is neither poetic, performative nor political. But tracing, following and listening to the movement is part of a political/poetic/performative linguistic work”.

In the great hall the two videos Något fint måste hända and Crnogorci/Montenegriner by Meira Ahmemulic are presented. In the video Något fint måste hända the artist’s own history and experiences is intertwined with notions of migration, the excluding structures in the field of art and a young authors search for a better life in America. In the video Crnogorci/Montenegriner we see the artist’s father sitting in a sofa, his mouth is moving but we can’t hear what he says. He is deprived of his voice and in its place we hear the narrator presenting prejudices and stereotypes regarding montenegrin men. They are described as unreliable, criminal and unemployable.

The professor in literature, Homi Bhaba, describes the stereotype as a linguistic category consisting of a language that has stagnated: “The stereotype is not a simplification because it would be a false representation of a given reality. It’s a simplification because it’s a hunched, fixed form of representation”. The stereotype is thereby made by repeating a false and constructed representation without a real original. In the video Ett språk måste vinna Meira Ahmemulic use her old high school as the point of departure to explore the Swedish language demands, prejudices and violence. But at the same time that it is within language boundaries are drawn and legitimized, it is through language that violence can be kept on a distance.

In the small hall the film Shapeshifters by the artist Sophie Vuković is presented. The film start and end in the great antiracist manifestation held in Kärrtorp, Stockholm in 2013. There Vuković find the film’s “you” with whom she initiate a multilingual dialogue about childhood and identity. By combining archival material with enactments and images from her family’s everyday life, Vuković creates a visual world reflecting the fragmentation the film describes. By exploring concepts of identity, belonging and language beyond solidified concepts and fixed categories, the exhibition offers new ways of seeing?

During the opening we also open a poster exhibition in our garage. Participating in the exhibition are young people in town who during fall took part in the series of workshops Say what you want! with the illustrator Martin Ander.

At 4 pm everyone is welcome to gather outside Art Lab Gnesta to attend Momentum Gnesta – a manifestation for a more human society.