Rhythm is the experience of the regular alternation between stronger and weaker elements in a reccuring pattern. In Art Lab Gnesta’s first exhibition in the new building on Bryggeriholmen, four invited artists set the tempo for the Brewery’s future activities. 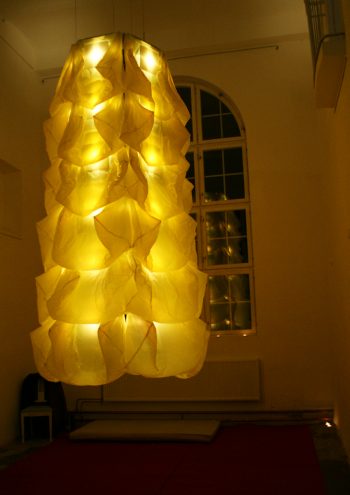 “More than anything else, technology is a means to escape the direct experience of life, to cover the nakedness that being skin to skin with life brings”. [1]

Nils Völker’s installation “Thirty Six” has taken over the old brewery hall. Yellow plastic bags form a pillar of light that hangs freely from the ceiling. Slowly they move, shifting shape and light, creating a rhythm not unlike our own breathing. They interact with the light that sprinkles into the hall and late autumn’s early sunsets.

Thirty Six combines high-tech solutions to achieve an organic feel, a constructed perception of life. While the piece fascinates in its directness, it can also make us reflect on how we relate to technology today and the interpersonal functions that have already been incorporated in the violence of technology.

In the project room is Asa Ersmark’s “Saturn”. A steady Saturn howls and whispers to us through radio signals in a NASA audio recording. But soon the mood shifts: the rings of Saturn fall and the planet slowly melts away.

The Roman god Saturn, who gave his name to the planet, was, according to myth, married to the chaste goddess Bona Dea who was honoured during nightly celebrations where men were prohibited and masculine sculptures covered. The philosopher Genevieve Lloyd has shown how thought and reason have historically been male-coded, with the female associated with sensation and chaos, and how this division has taken hold in Western philosophy.

“The reflections of the order and Reason of the universe is supposed to be less clear in the souls of women than in Those of men. Their souls originate from the fallen souls of men who were lacking in Reason; hence They are closer to the turbulence of non-rational accretions to the soul “. [2]

The universe is a man. But Saturn is melting now. It’s time for a new world order.
“The toilet is all part of the history of human hygiene, which is a critical chapter in the growth of civilisation”. [3]
Arts and agricultural commune Kultivator from Öland sneak a start on next year’s thematic focus on our relationship with nature. In conjunction with the newly installed biological toilet, Kultivator makes a tribute to the Indian sociologist Bindeshwar Pathak, founder of Sulabh International, and the toilet in general.

The toilet, with its associations with an everlasting cycle, is seen here as a structure of dignity, health and resource utilisation. In Sweden, it is obvious, but in light of the Indian Sulabh movement’s environmental efforts, it becomes a model for parallel ecological and social development, and a way for us to evaluate and reevaluate what we already have.
“Sooner or later the music must take its place. Music’s ownership of the rooms are of a different character than property ownership. Still, it is proprietry and ultimately violent. “[4]

During the vernissage, Thomas Bernstrup will conduct a performance from his upcoming album Sing My Body Electric. In his own unmistakable performance persona, dressed in elaborate costumes in high-gloss latex, he addresses issues of identity and gender. The line between the virtual and the real is examined here in the meeting between classicism, gothic noir and computer game aesthetics.
The Rhythm exhibition is a tribute to Art Lab Gnesta and its creation. Unlike the upcoming exhibition program, which deepened thematically-annually, the participating artists now been invited by the Board based on an intuitive process that reflect the emergence. As a place for experimental connections between art and society, Art Lab Gnesta intends to build bridges between artists, the local environment, and other art institutions. The four artworks presented in the exhibition represent Art Lab Gnesta’s first heartbeat, indispensable to the rhythm that will permeate the entire project.