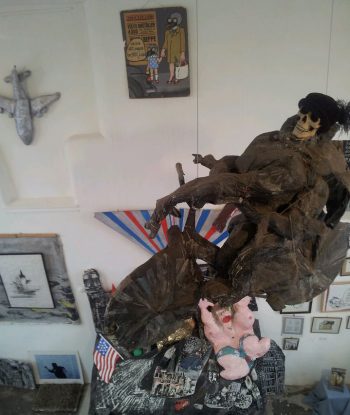 The first time I came into personal contact with Lars Hillersberg was about two years after the event that would be remembered as September 11. Hillersberg then had an exhibition at Galleri Hjärnstorm, located in a basement on the corner of Valhallavagen and Skeppargatan in central Stockholm. Once at the exhibition, there was no mistaking who in the room was Hillersberg. He was busy working on a large collage of the cartoon characters Fix and Fox [1] being chased by the cops. I had never met Hillersberg before but knew most of his work, and thought it was a slightly odd – but pleasant and interactive way – to have vernissage. Later I learned that this was not a rarity for Hillersberg, the whole exhibition period included his presence and activity. As a result, it was only when the exhibition was dismantled that all the works were completed.

In the exhibition was a picture that I recognised from Liljevalchs that had appeared in the media a year earlier: the work was titled September 11. The motif was the same as most of us today remember the date: two tall rectangular buildings with grey smoke coming out of the side of one skyscraper. However, what was different in Hillersberg’s way of portraying the incident was that together with the buildings the Statue of Liberty bent down to the two towers, and burnt them with her torch. The picture was a lithograph that was among hundreds of others in a suitcase on the floor, where you yourself had to pick and choose. I was filled this same excitement as when I was a child and came into a store full of secondhand comics: you never knew what you would find.
At the show I also met Pia Jämtvall and was invited to come down to Gnesta to see her exhibition and visit her at Bryggeriholmen a week later. I and my then girlfriend went down over a day to go on the exhibition, where she showed drawings that included some which came from her comic book “Sannsagar om Pia” (“True Stories about Pia”). The story is about Pia’s difficult childhood with abusive parents who were unable to take care of her. She want to live with various relatives, who, however, can not handle the task, and after she left her temporary “parents” she quickly came into contact with drugs. Here she illustrates what comes with an active addiction: the friends who are dying, her anxiety and fear of coming out of dependency. “Sannsagar om Pia” is an incredibly dark story about the adult world’s betrayal of a lonely child, loaded with black humour.

After attending Pia’s vernissage we went to their house at Bryggeriholmen. As I remember it, Lasse was firstly very proud of the motorcycle gang which had its club rooms on the premises. Then as we came into the house the lower rooms we went through reminded us of the set design from Pettson and Findus: it was very crowded and there was much to see. Then we went up into what functioned as a combined dining room and training hall: there was a large ping-pong table, which also served as a dining table. The rest of the house was divided into several rooms that were filled with Hillersberg’s collection of books and art. In the attic there were large sculptures in papier-mâché, and it was a pretty eerie feeling when you saw their spirit fill up the entire attic. I took some pictures while I walked around the house, which I’m very happy to be able to share with you today.

One could say that the feeling that remained from our visit was the opposite of what Pia describes in “Sannsagar om Pia.” Both Hillersberg and Pia were two very warm people, they spread a confidence around them that made us feel very welcome in their home.
Valdemar Gerdin, 2011

[1] Fix and Fox was a kids’ comic book in the spirit of Tom and Jerry that was popular in the sixties and seventies.