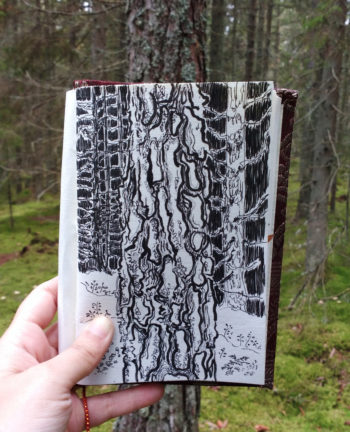 25th October, 4 pm to 6 pm, at Södertälje Konstnärskrets
with a light dinner included

During october the illustrator Rajasee Ray has been having a residency at Art Lab Gnesta. The residency is a part of Swamp Storytelling, an ongoing investigation of the swamp and its biological and mythological functions. In her practice Ray often works with questions related to scientific research, ecology and climate change. Through intuitive, sketch-based illustrations Ray mediate complex research and scientific studies.

In her practice as an illustrator Ray work in the spaces where fiction and the everyday can co-exist. Her process often consists of encountering everyday spaces, and layering them with a touch of the magical. During her residency at Art Lab Gnesta, she has re-encountered the fairytale forest as a living breathing ecosystem, with its highly tangible politics and economies, much of which is still tangled up in our childhood ideas of fictional characters and their archetypal storylines.

With the workshop, Rajasee Ray invite you to to re-imagine the contemporary forest through fictional characters who subvert their archetypes. The aim is to collaboratively create our own “forest” – a system of spaces where these characters will co-exist and cross-paths – a system that has its own hierarchy and flow.

Swamp Storytelling is a communal investigation of the swamp and its biological and mythological functions. The goal is to combine the fields of scientific research and artistic production and their relevance for current environmental issues, while at the same time investigating how art can function as a communicator of research knowledge. The project has been run since 2016 as a collaboration with the Indian scientist network Earth CoLab and the Swedish Institute.

Arranged in cooperation with: