Our collaboration with Ingela Ihrman started in preparation for her solo exhibition Tropikerna i Gnesta in May 2013, in which previous works were presented together with Bjuvstegocefalen. The latter had been produced at Art Lab Gnesta and was subsequently part of her solo exhibition Det frodas i framtiden at Tensta Art Gallery (2016). Also Jätteknölkallan blommar!, a performance flowering that we presented during a guest performance at Microclima in Venice in June 2013, was created during her residency here.

After a residency together with the group from the Hägersten Botanical Gardens in the summer of 2015, which resulted in the new festival performance Träskafton, Ingela Ihrman returned to us in 2016, now as artist in the Swamp Storytelling exchange. The installation and performance “Afrodite rör sig mot grumligare vatten” was inspired by field studies in the tidal zone of the Indian tropical island Neil Island. It was shown as part of the Träskbiennalen in 2016. 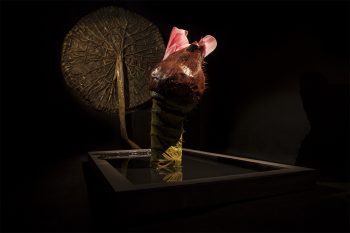