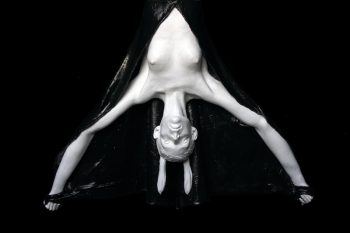 In the summer of 2012 artist Cajsa von Zeipel worked intensively with a larger production during a residency stay at Art Lab Gnesta. One year later, we invited her back for a new production. We are pleased to announce Bat from the recent series of sculptures Zoo Collective produced here in 2013.

Bat – read as both the animal and the sport’s gear – occupies the main exhibition hall at the Art Lab Gnesta this autumn. The piece portrays a young woman in a bat like pose hanging from the ceiling. Cajsa von Zeipel’s work refers both to teens, popular culture and to the Renaissance and ancient ideals. At the same time the white surface of the sculpture carry a study of female sexuality and the exploration, or extinction, of one’s own self .

In the project room next to the exhibitions is a work by poet Rut Hillarp. The white hands, 1950, is an early example of Swedish experimental film which won the prize for best film same year. Hillarp herself called the work “a poem without words” as it portrays legend of Tristan and Isolde through a symbolist imagery. Suffering and passion were closely related in Hillarps artistic and poetic production, as is the idea of autopossession – self possession.