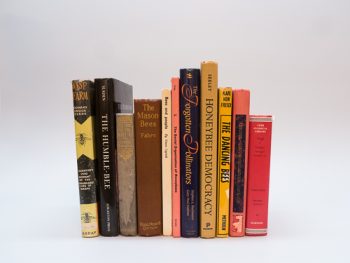 In the exhibition Political Beekeeper’s Library Erik Sjödin presents his ongoing work to collect, organize and activate books in which parallels are drawn between humans and bees.

During this past summer, Erik Sjödin led a study circle based on texts on the relationship between humans and bees. Next to the beehives at the farming cooperative Under tallarna in Järna, the participants met to discuss alternative apiculture, how bees are being used in the military and how descriptions of bees are affected by our cultural ideas.

Bees are said to be the most metaphrased animal after man. The books in the Political Beekeeper’s Library illustrates how we’ve historically projected our cultural ideals of apiculture: from using it as an evidence of the benefits of a strong leader, to today’s more democratic ideas of collective decision making.

The exhibition is part of the Utlöparna, a collaboration between Konstfrämjandet, Under tallarna and Art Lab Gnesta.