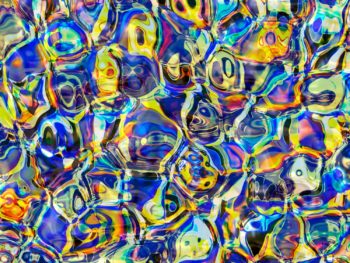 In Lars-Gunnar Bodin’s compositions we find one color used continuously to describe everything from a certain kind of weather and blobs to humans, emotions and more or less abstract spaces. Namely the color blue, a color that has a long social and cultural history, having been used to represent both the classical elements and the celestial as well as class and political background. Our world is blue at its edges and in its depths. The blue is then the light that got lost. Light at the blue end of the spectrum does not travel the whole distance from the sun to us. It gets dispersed among the molecules of air, it gets scattered in the water. Perhaps the encounter with Bodin’s compositions demand us to get lost. To pass by the familiar and welcome the unknown, the unexplained and elusive.

Bodin’s compositions ask from us to leave behind the division between sound and its history, the random and planned, the serious and absurd, between sound and noise. In his work he explores language, the different dimensions of reality and technological developments. Now we present the exhibition Almost diffuse but shimmering including a selection of Bodin’s sound-, visual- and text-sound-compositions.

The canonized multimedia work Clouds (1976) is presented in a new form in our smaller hall. In our greater hall we present Enbart för Kerstin (1992) and Dizkus (1996) together a number visual compositions and the following four unreleased compositions Seance 4 (1965), From any point-44.1 (1968), Liptons Äventyr (2003) and Blottlagda händelser och skeenden ur ett dolt förflutet (2009).